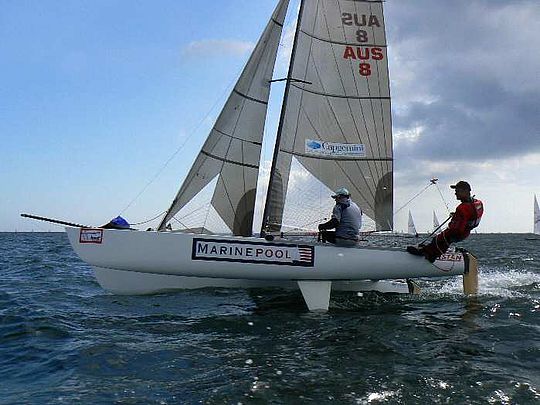 Beijing Olympic Sailing medal aspirants Darren Bundock and Glenn Ashby have finished off their first season together in fantastic form winning the Olympic Tornado World Championship in San Isidro Argentina with a race to spare.

It was the sixth major regatta the pair have won since joining forces together for the first time as a Olympic combination just 13 months ago to race the Tornado Catamaran class at the upcoming Olympic Games in Beijing.

Bundock has won five of the last nine Tornado World Championships and is now only one world championship behind retired sailor John Forbes, who Bundock partnered to four Tornado Championships in 1998, 2001, 2002 and 2003.

The pair set there sights on claiming three world championships in three different classes during 2006 but narrowly fell short after claiming the ISAF World Sailings Games in Austria in May but unfortunately finished second in the 2006 Formula 18 World Championships in France in mid July.

Bundock said "the focus the whole year has been on this world championship. This is the one we wanted and despite previously winning four times before this one means a lot after the effort and preparation for this championship."

Bundock continued "A lot has got to be said for our coach Mike Fletcher he has coached me to five world championships now in the Olympic Class and coached Mitch Booth and John Forbes to one before I came along. His persistence before this regatta with getting our trimming techniques and speed right has probably won the regatta for us".

An elated Ashby said "Its great to win my first Tornado World Championships in relatively light conditions and finish with a score card consistently in the top six. Its a added bonus and a great feeling to win with sails I made myself".

Fletcher commented "The pairs decision making skills this week has won the regatta for them, yesterday they made some of the best decisions when under pressure. On the starting line they knew when to push and when it was getting crowded and the risk was high to back out and find another hole. Decisions like that win world championships. Yesterday they showed the world they wanted this World championship".